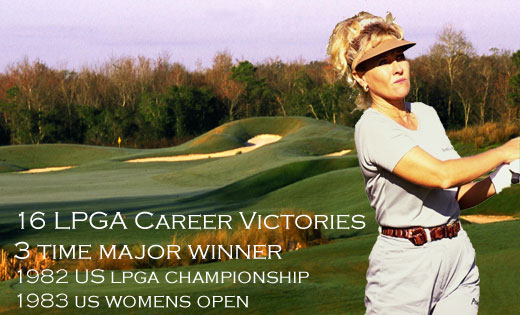 Jan Stephenson became a professional golfer in 1973 winning the Australian Open that year. She joined the LPGA Tour in 1974 and was named Rookie of the Year that season. Her first victory came in 1976 at the Sarah Coventry Naples Classic. Jan had unprecidented success in the 1980s winning 16 LPGA titles including 3 major championships, 10 International titles including another 3 majors, and becoming the first woman to win on 5 continents. In the course of her professional golfing career, Jan has made significant contributions to the successful growth of the LPGA tour itself.

Jan continued making her mark in Women’s Golf by being one of the founding members of the Women’s Senior Golf Tour, on which she is a winner as well. Jan was honored among GOLF Magazine’s “100 Heroes” during the 1988 Centennial of Golf in America celebration, and recognized during the LPGA’s 50th Anniversary in 2000 as one of the LPGA’s top 50 players and teachers.