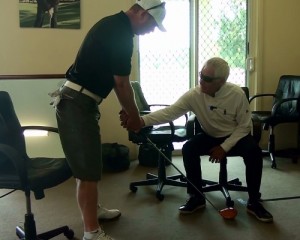 Brad Lamb has finished in a tie on for 3rd in the 72 hole Jeep Final at Royal Pines Golf Club. He said he drove the ball as good as he ever has after a third round 68 on Saturday in difficult windy conditions. He finished three shots back of eventual winner Kim Felton, with rounds of 72, 68, 70 and 71. Brad’s pre-tournament driver lesson with Gary is featured in Tour Players Lessons this month in the Members Area. Euan Walters also finished well, a final round 67 moving him up to 11th and second with partner and Socceroos star Harry Kewell, in the Pro-am.