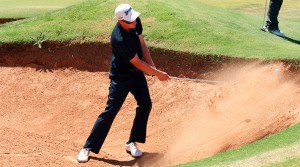 Taylor Cooper fired a second round 61 and will take a two shot lead into the final round at the Murray Bridge Hotel PGA Classic.

“I was pretty annoyed at myself considering the score, 59 was certainly in the back of my mind with a few holes to play,” said Cooper after a three-putt bogey on 17.

The tournament is the feature event in SA which makes up part of the 2017 WA/SA PGA Subaru Pro-Am Series.