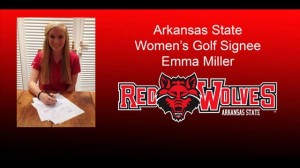 Earlier this year Miller finished 10th in the Mid Wales Girls Open and also recorded a second-place finish in the Monmouthshire Girls County Championships. She was a member of the Newport Team at the club level and helped the team to a runner-up finish in the Ladies Welsh Team Championships. She earned the Newport 2013 Ladies Singles Knockout Competition championship and finished sixth in the Welsh Girls Championships, which earned her a selection for Wales in the 2013 Home Internationals. During the Home Internationals, she was the winner of the Jane Roberts Cup, which is awarded by Wales to the girl that scored the most points in the competition.

“This is another great signee for the A-State women’s golf team this upcoming year,” Desbiens Shaw said. “I am so happy that Emma decided to commit to us. She will be a wonderful addition to our team and a great player full of international experience. Emma is very dedicated in her sport and will definitely show her competitive side right away. Emma is a great student who will do exceptionally in the classroom.”