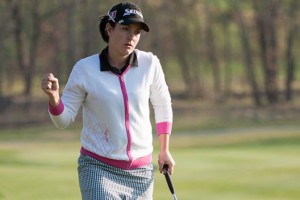 Rebecca Flood had a bit of an up and down day in the final round of the Terre Blanche Ladies Open near Cannes in Provence. She had 6 birdies but bogeys on two of the first three holes and a double on the back nine helped the eventual winner Marion Ricordeau to a 3 shot victory. Ricordeau had 5 birdies the front nine, but Rebecca recovered well and eventually finished at 5 under par and in outright second.