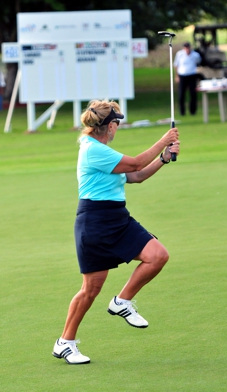 The World Team has been “trending” for its first ISPS Handa Cup since last year’s 24-24 tie resulted in the U.S. retaining the trophy. An international squad bolstered by a couple of Brits and a veteran Australian showed up in Nashville and honored its long held primary objective: win the cup. Laura Davies and Trish Johnson swept their morning and afternoon team matches on Saturday, helping the World to an overnight 14-10 lead. Team USA’s Beth Daniel tried to stop their mojo with an opening singles match win first thing in the morning against Davies that quickly closed the gap to 14-12. (By the way, Davies drove the green on 18 and had a look at eagle to square her match with Daniel but missed the putt.) Trish Johnson then took out perennial point winner Rosie Jones for the first time since 2007 and the World was up by four again. World Team veteran Jan Stephenson sinks a 25-foot birdie putt on the 18th green to clinch the internationals’ first ISPS Handa Cup in history. The next several matches saw the World build it’s lead to 22-14 with wins by Helen Alfredsson, Alison Nicholas and Lorie Kane, and then Japan’s Mieko Nomura sealed an overall contest tie at a minimum with her win over Pat Bradley, giving the World its biggest lead, 24-14. Americans Laurie Rinker, Nancy Scranton and Cindy Figg-Currier closed the gap considerably with their three wins, bringing it to 24-20. Enter Jan Stephenson. She and Sherri Turner were locked at even par on 18. Stephenson hit her approach to 25-feet and then curled in a dramatic putt for birdie that clinched the Handa Cup for the World. It is the first time in the history of the event that the international team has won the ISPS Handa Cup.