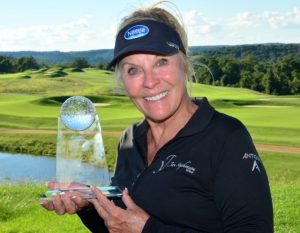 Congratulations to Right-Sided legend Jan Stephenson for her fourth consecutive Legends Honors Division win at The Legends Championship. She won her division by four shots. We would also like to congratulate Trish Johnson on her fantastic first win at French Lick. Trish had a chipping lesson from Gary earlier this year and is a real student of the game. Johnson, runner-up to Inkster at last year’s Legends Championship, had avenged her 2015 loss and earned her first Legends Tour victory. It was also the longest playoff in the 16-year history of The Legends Tour.