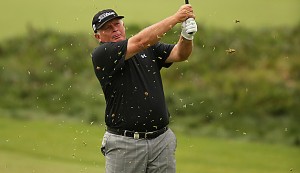 Peter Senior fired up after play resumed at Sunningdale Golf Club in the Senior Open. He made four birdies on his front nine and fired a round of 69. He is currently inside the top 10 after play in the third round was called due to insufficient light. He is on six-under-par total, only four shots out of the lead.