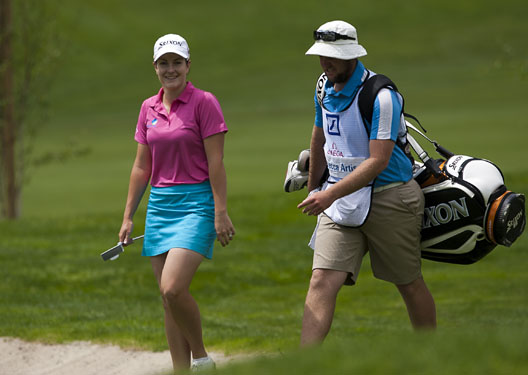 Rebecca Artis shot her career-best round of eight under par 64 to take the first round lead at the Deutsche Bank Ladies Swiss Open. She finished with an eagle and four birdies in her last 6 holes.

“I was hitting the ball well so I was just trying to fly it at the pins really. The greens are soft so we can really fly it at the pin. I had a good lay-up number going up the 15th so I actually holed that for eagle there and then I had a good couple of numbers coming in. I wasn’t in between clubs or anything so I could just pull clubs out and fire it at the pin so it was really good,” said Artis

On her eagle at the par-five 15th, she said: “I hit driver, four-iron. Geoff and I were having a little competition to see how close we could get to the number. When I hit it I said I reckon I’ll have 102 to the pin and he said, 101. We got down there and I think I had 100 to the pin and I said to Geoff, if I just hit a full wedge and fly it a little bit past it and spin it back, and that’s what I did, put it two metres past and spun it back in.”