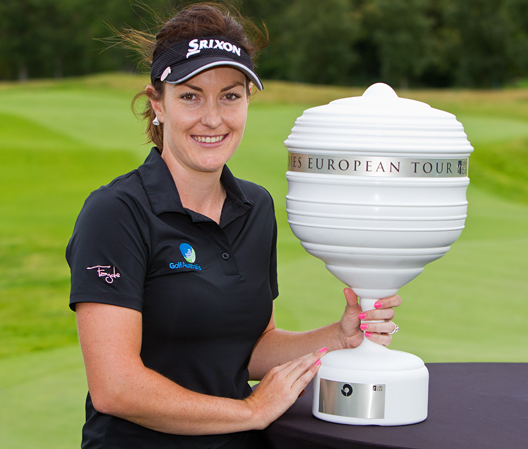 Right Sider Rebecca Artis came from five strokes behind overnight leader Caroline Hedwall to secure her first Ladies European Tour victory at the Helsingborg Open in Sweden. She fired rounds of 69, 71, 71 and 69 to post a winning total of 280, eight-under-par, ending a stroke ahead of Hedwall after a warm and windy week at Vasatorps Golf Club. “It was a great day out there. I played solid golf all day and to walk away with a win is unbelievable,” said Artis, who had husband Geoff on the bag. “I just had to go out there and play steady early and see if I could make a couple of birdies early on.” When asked if she was surprised to win, especially in such a high quality field against three of the world’s top 25 players, Artis continued: “I’d like to say I’m not surprised. It’s a lot of hard work that goes into winning a golf tournament and I’m absolutely delighted. “When I came here, I said to my husband that I thought it was a great golf course. I’d heard it could get windy around here and I thought if it got windy and I was hitting the ball as well as I had been doing I could definitely give it a chance. “We get wind in Australia, it depends where you are, but I like playing in the wind, I enjoy tough conditions and go out there and grind it out. “I knew that I had to go out there and make some birdies early on and put some pressure on the leaders. I put myself into contention going into the back nine and knew that if the conditions were like they were the first three days and windy, that anything could happen out there. It’s not an easy golf course when the wind’s up like that, so I just knew that if I could get off to a good start and post some birdies I could be right in it down the stretch.” The win capped a tremendous six weeks for Artis, during which time she had earned two top ten finishes, although it could have been three. Only four weeks earlier, she was lying in sixth place going into the final round of the Pilsen Golf Masters when forced to pull out with a back injury. “My back went on me on the golf course during the second round and I pulled out before the final round because I just didn’t feel fit enough to go out there. I’ve had previous back injuries so I didn’t want to force it. I didn’t want to be in the same position again,” Artis explained. “I’ve had some great weeks out here, great results, and I’ve been playing really well the last three or four tournaments so I felt pretty confident coming in this week with the way my golf was. My coach, Luke Edwin, I brought him over from Australia in Spain and it’s paid off.” Artis earned a €37,500 first prize cheque and punched her ticket to next week’s Evian Championship in France, the final major of the year. Although she began the final round slowly with a bogey on the fifth hole, Artis stormed up the leader board with four birdies in five holes from the seventh. She tied for the lead with Hedwall after 10 holes and moved two clear after 11. Hedwall’s challenge stalled with a double bogey on the fifth, followed by bogeys on 10 and 11 and she was unable to recover. After Artis holed a putt of seven feet for birdie on 17, she moved three ahead with a hole to play and although Hedwall also birdied 17, it was too little too late. After hitting a fantastic approach shot to just 12 feet below the hole on 18, Artis three-putted, opening the door for Hedwall, but the Swedish Solheim Cup star could only make par, ending in second place. “This is not how I wanted it to end but I’m very happy for Rebecca,” Hedwall said. “She played awesome today and it just wasn’t meant to be this time.