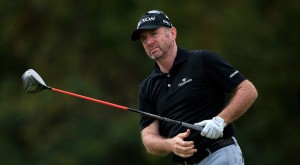 Rod Pampling fired a second consecutive 63 to grab a four-shot lead at the Web.com Tour’s BMW Charity Pro-Am sponsored by SYNNEX. He stands at 18-under-par and takes a four-shot lead over Oregon native Jason Allred (65) into Saturday’s round.

Pampling’s 18-under start is one off the Tour’s all-time 36-hole record set by Kevin Chappell (2010 Ford Wayne Gretzky Classic) and Webb Simpson (2008 Chattanooga Classic). His 126 total is the best 36-hole score on Tour this year, bettering Peter Malnati’s 128 start in Brazil.

“It’s nice to see balls going in the hole,” Pampling said. “In this game we see a lot of bad stuff, so when it’s coming around nice you just enjoy the walk and don’t get in your own way. It’s certainly a more relaxing atmosphere having playing (amateur) partners.”