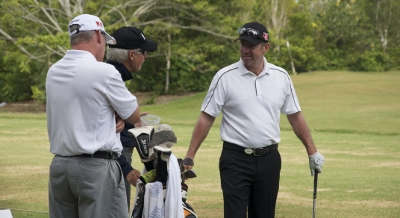 Rod Pampling played in the worst of it in the final round, as the winds gusted to 80km he kept the ball boring through it. Gary said it was one of the best displays of hitting he had seen in a long time. When play was called off he had just birdied the 8th and was heard saying as he walked off ” I want to keep playing , I am the Bishop “. As in Caddy Shack, the weather did not get much better and he played himself into contention on the back nine with more shallow knock downs. ” I hit one bad shot on 16 and made double, but apart from that it was great”. He finished in a tie for 10th. Look out for him this week at Coolum, he plays well there and after a week with Gary is swinging it better than ever.