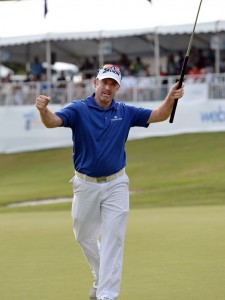 Rod Pampling went wire-to-wire in winning this week’s BMW Charity Pro-Am Presented by SYNNEX Corporation. He opened with rounds of 63-63 at the three-course event, then held on with rounds of 69-66 at Thornblade Club in Greenville for a two-stroke victory over Kelly Kraft. He made seven birdies in his final round.

The result moves Rod to No. 8 on the Web.com Tour Regular Season money list. Rod’s 29 birdies for the week were the most in the field; he also ranked first in putts per green in regulation and T2 in driving accuracy.

Rod has worked hard on getting him back to his model this year. He has had two top-10 finishes this season on the Web.com Tour and leads the tour in scoring average. This was a great result. Congratulations Pamps!  What a Champion!

It’s been a tough month saying goodbye to his Dad. His work ethic has never been a question. His commitment has never wavered and his passion is forever present…