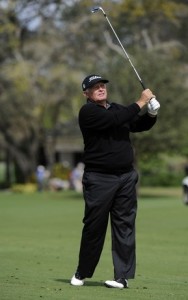 Peter Senior sent Gary a text yesterday after play was suspended and he was 8 over par through 10 holes. He said he was very tired and had played enough golf for the year. Gary suggested he should chip it around and enjoy the wildlife. Senior replied he had already seen plenty of wildlife where he had been hitting it. He made the comeback of the day in the second round, with 5 birdies and a round of 68. He is now only a couple of shots outside the Top 20. Last place this year at the Nedbank Golf Challenge is €73,416  .