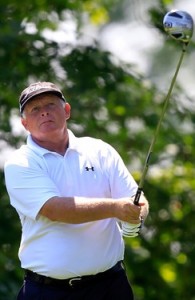 Peter Senior fired a final round of 68 at the Greater Gwinnett Championship. He made 7 birdies in the final round and averaged over 90% of fairways and 75% of greens in regulation for the week. He said he is playing well but his scoring has not been sharp due to the lack of tournaments at the start of the Champions Tour season.